For John music is his contribution to the planet and it fills him with joy that at this moment, on this little blue planet someone somewhere is listening to something he made. 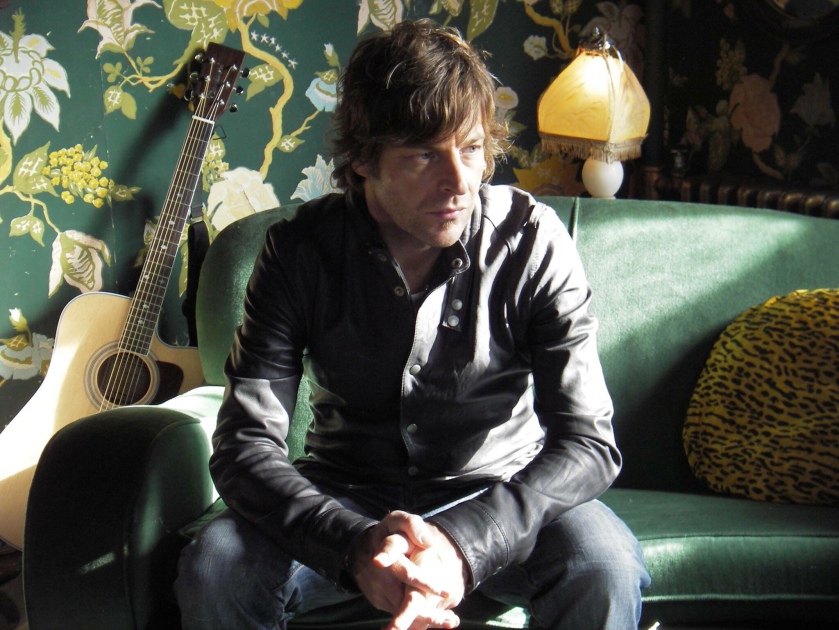 I have a reverence for musicians that I once reserved for priests – they stand on a stage, they raise their hands, the magic begins. So for the Book of Godless Verse, I needed a deeper understanding of how music is made, how it connects its maker and the listener and where it comes from. I wanted to talk to someone who lives for and through music, someone for whom music was more than the thing they did but called to them. John McGough is a professional musician, writer and producer. His passion for music takes him across the genres to play and work with artists as diverse as “A’” list DJs including Carl Cox and Eric Morrillo, the X-factor’s James Arthur and Jools Holland.

Even as he’s sitting talking to me I can see that his music is calling him away on a new adventure, but he stayed long enough to share some secrets with me.

So I ask the blasphemous question – how is music made? The question we must not ask about the divine but for a musician the answer is easy – alertness to real human events. John tells me that all of his music comes from real events. Before that feeling of out-pouring and unravelling that is the writing of a song, comes a build up of tension and agitation, like a storm. Before the song Superman, written for the James Arthur project, John was unsettled all day. He had been desperately missing his wife whilst working away for a number of months, but he couldn’t give words or shape to the feeling. It was just a restlessness. He couldn’t focus on work so decided to wash the car, but stopped on the way to pick up the guitar, just a strum he told himself, then the whole song came flowing out in 15 minutes.

All of the trapped feelings of missing and loneliness came pouring out in perfect form into the song.

John is convinced that though uncomfortable, these feelings of restlessness, disruption and even suffering are the route to that true and real place that songs come from. You have to be alert to these feelings, to allow yourself to feel them.

It’s a kind of disciplined vulnerability. Then in moments when you let go, let your guard down – the music comes.

Whilst he was in Bali, just watching the world, a line drifted in his head ‘while the world stares at the phones I’m just staring at you’ and it grew into a song. This attentiveness is at the heart of John’s work and his relationships. It concerns him that as human beings we are losing that pure attentiveness to others. It is because of this that John’s main subjects for his songs are his wife Nam and his family, everything he writes comes from this authentic place of feeling.

John tells me there is a great deal of pressure from the industry to build in repetition because it’s expected that people no longer have the attention span for a solo, the place where the feelings go. John resists this, insisting that real songs need to be preserved, created and respected.

For John, the appeal of music both for the player and the listener is its unpredictability. There is a ‘shiver’ which can only be felt when you hear something you’ve never heard before. It connects you to something you never knew about yourself or your world. It is the first time that sound has vibrated on the earth. That’s the magic of it.

John explains his early encounters with music, the feeling of going to see bands at the Coatham Bowl in Redcar, his favourite moment was the half-dark watching the empty stage before the band swept on. The feeling that anything could happen. It is this moment of anticipation, which he tries to ignite in his own music.

Yet that is the shared moment of connection, when the music is alive and transmitted. The process before the ignition requires isolation, dedication and discipline.

That’s the paradox of music John reveals – it is a deeply private and personal process of creation, inspired by intimate moments but when it becomes the finished thing it has the ability to connect with thousands, millions, often at the same time and each of those million individuals connects with the sound in a unique way.

John’s daily ritual involves an hour’s warm up everyday, it sounds like a musical meditation. He plays a single note and lets the breath unravel into the sound. Playing music is a full body experience. John will play his sax into a corner to feel the vibrations bounce back at him, the resonance through tissue and into the blood tells him what he’s truly playing. With guitar, he holds the instrument close to his belly and it reverberates like a purring cat.

It is this physical-spiritual quality of music, the ability to move the body until it wakes the soul that has supported John through life threatening events. A serious car-crash left John with a broken neck, requiring a neck and head brace. There was no escape from the excruciating personal prison of pain that this treatment brought – except music. Every day John listened to a 45 minute cassette tape of the House Martins. The music lifted him above and beyond the pain.

There are no limits to the transformative power of music as it travels from its maker to the listener. Music can bring sleep to the sleepless or awaken a revolution. Carl Cox, a long time collaborator with John calls his party Revolution.

John recalls the time he recorded a saxophone track in his room in Ruby Street in Saltburn and 48hrs later Carl Cox had mixed it and played it in Las Vegas to 40,000 people. Nothing can travel straight from the heart out into the world the way music can.

We spend a great deal of time and effort locking up and keeping secret our feelings – whether those feelings are undeclared love or the demand for freedom – music pops the lock on all of those feelings.

It is John’s heartfelt belief that people want to try to be open, but for so many reasons they can’t be, they certainly can’t find the words to fit the shape of their need. Music channels what people need to say to themselves and to one another. It’s a shared experience but it’s so personal too. A hundred people dancing on the dance floor are dancing together but in their own moment, with their own memories. It’s their secret shared only through the movement of bodies to the rhythm, a deeper truth – spoken only by muscle, breath and heartbeats. Because of this a song can mean what you need it to mean.

In a world where we still prize being tough, hard and impenetrable music is always an invitation to vulnerability.

People are mesmerized by the vulnerability that music creates, that’s the real attraction of the front-man, not the alpha-ness but the openness.

Musicians like John work hard to achieve that openness, that fluid connection to their vulnerability. The daily work of music is demanding, hard and requires self-discipline and sacrifice. It is a constant presence, if you’re not doing it you’re thinking about it. The reward for this dedication is a feeling of wholeness. There is the constant wonder of the new and uncreated, coupled with the legacy of the music that’s out there.

For John music is his children, it’s his contribution to the planet and it fills him with joy that at this moment, on this little blue planet someone somewhere is listening to something he made.

It makes John sad that music is now so accessible that we have come to treat it as disposable. Once buying a record was a ritual from hearing it on the radio to slipping the vinyl out of its pristine sleeve and sliding it under the needle. Every song, he cautions, is from someone’s heart, it has resonance and deserves a patient listener.

John’s new adventure is learning to play the ukulele. He humbly says that he often feels as though he still doesn’t know what he’s doing but if it sounds good it’s working. I think this humility is part of John’s on going striving to make something true and real. It’s perhaps the reason he wakes up everyday at 50 years old still hungry to make music, still excited to see what new sound the day will bring. John feels blessed, because ‘music has always looked after me’.

John tells us that to have music in our lives isn’t about being good, it’s about how much fun we can have doing it. So if you play music, devote some time to it, give it 15 minutes everyday. Alone. Give yourself and your instrument that time to play, undirected. Just go for it see where it will take you.

If you don’t play – listen – alone. One of the saddest things is when we break up with a beloved song – maybe it reminds us of someone we have lost or a part of our lives we had to let go. But it still has something to teach us – that emotion we’re avoiding touching like it’s a wounded eye. Take those three minutes listen to that song and let it take you where you need to go. If you are so inclined use it as a starting point to write. Happy listening.

Interview by Carmen Marcus for The Book of Godless Verse

John passed away in 2018 but he is a legend and his music and kindness lives on. Go listen to what he has to offer.

As the daughter of a Yorkshire Fisherman and Irish Mother, my writing brings together the visceral and the magical. My debut novel #How Saints Die was published with Harvill Secker in 2017. It won New Writing North's Northern Promise Award as a work in progress and was longlisted for the Desmond Elliott Prize in 2018. My poetry has been commissioned by BBC Radio, The Royal Festival Hall and Durham Book Festival. As a child of an 80s council estate I am an advocate for working class writers and stories. I’m currently working on my first poetry collection The Book of Godless Verse and my next novel. I try to live up to the words of my first critic and primary school teacher ‘weird minus one house point.’ View all posts by Carmen Marcus

This is a text widget, which allows you to add text or HTML to your sidebar. You can use them to display text, links, images, HTML, or a combination of these. Edit them in the Widget section of the Customizer.
%d bloggers like this: